Fort Road is a necessary evil for cyclists entering the relative haven of East Coast Park from the west. Even if you stay on the park connectors, you have to expose yourself briefly on this road. It terminates at what used to be Area A but has been a construction site for the longest time.

If you are early enough, you won't have to meet the tipsters, dump trucks, lorries and all sorts of heavy vehicles which use the area intensively during the day. Still, the road conditions are not the best as these vehicles tear up the asphalt regularly, or drip cement, so it's no joke for cyclists. 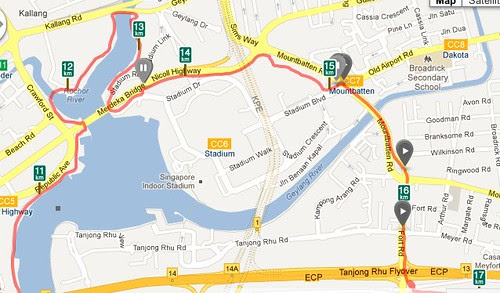 Getting to ECP via Fort Road

A brief error on the part of drivers is all it takes to snuff out a life instantly. It won’t matter then whose mistake it was. See "Straits Times: "Tipper driver jailed 7 weeks for causing cyclist's death".

Well, just watching those trucks roar by the roundabout making the road shudder made me feel most uncomfortable. So I looked for an alternative and found one in the form of pedestrian paths through ECP and Katong Park.

I'm not usually a fan of pedestrian paths as you encounter intersections you have to be careful about and pedestrians whom you must give way to. However, rather than battle with heavy vehicles, I've adopted this path when riding to or from ECP. 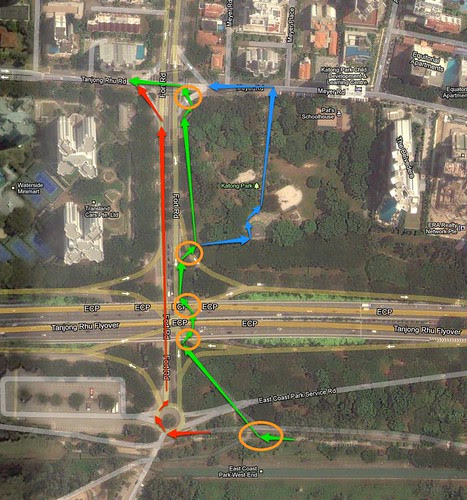 The detour alongside or through Katong Park

The brown circles denote zebra crossings or traffic light junctions. You have to stop and look at traffic before moving on even when the green man is lit, or stop for a red. The green man appears quickly after you hit the button, but even if it is in your favour, do check that a vehicle is not bearing down on you. Drivers can make mistakes, but you pay the price. so be cautious.

Once across, you can ride alongside Katong Park. If there are pedestrians, I do not like them to feel pressured by my presence so I prefer to ride through Katong Park, slowly.

Emerging at Meyer Road, it’s a straight ride down to Tanjung Rhu Road and on to Marina Barrage.

Try to stay safe on the road!

Posted by Sivasothi at 9:59 pm