The recommendations were forwarded to relevant Ministries and agencies and they have given their replies.

Make the environment conducive for active modes of transport (paras 29-30)
29. Short trips in between trips are difficult to serve with public transport because access and waiting time make up a large percentage of trip time. Active modes of transport can bring physical activity into daily routines. This can complement the increasing efforts by public health advocates to increase activity levels in society. Sedentary lifestyles are a key cause of a growing public health crisis as the population ages and become more affluent. However the urban fabric is rather hostile and dangerous for most ‘active transportation’ which includes especially walking, running, wheelchair use, and bicycling but in-line skates, new kinds of foot scooters etc. Therefore special provisions must be made. Having people on these ‘streets’ is good for the humanity of the city and promotes a sense of place.

30. Provide a safe environment for pedestrians and other active mode of transportation running concurrently on the same space. Encourage the use of active transport modes like walking, cycling, in line skates, skateboarding foot or motorized scooters for short trips of less than 4 km. This encourages healthy physical activity, time efficiency to using public transport, reduced vehicular congestion, and promotes sense of place and community.

MOT / LTA (with inputs from MND) reply:
Generally, there are avenues for people to travel by active modes of transport such as walking and cycling. Cyclists for example, are currently able to travel on the roads, and the Traffic Police is reviewing whether they could be allowed on the pavement. The government is also working actively with the Town Councils and local community groups to build cycling tracks in places such as Tampines. Pedestrian paths are provided within road reserves and are also planned and encouraged within housing estates. To create a more conducive environment for walking, covered linkways are currently provided, where possible, to link main transport nodes like MRT stations and bus stops, to housing estates, schools, etc. Pedestrian friendly features like footpath ramps and railings are also provided where possible. The various agencies would continue to work together with the local community to plan and build infrastructure or facilities for active modes of transport where possible.
Posted by Chu Wa at 6:28 am 2 comments:

"Let's cycle in Singapore!" is a term paper by NUS undergraduate Zhang Guanyang. He examines cycling issues in Singapore based on newspaper reports and letters mainly from The Straits Times, 2000-2005, and discusses cycling as a form of transport. It includes an annex with the chronological list of the cycling-related news on which this essay was based.

The paper can be read or downloaded as a pdf here.

Posted by Sivasothi at 6:13 pm No comments:

If cyclists want to share the busy roads, we should employ some of the simple things that can make a critical difference to our safety. We have more to lose and its not enough to be right, we should avoid being in the potentially wrong place as far as possible!

I have found a rear-view mirror critical for cycling in busy roads. It offers me the ability to constantly monitor my environment and strategise my approach at critical areas such as congested, narrow roads, bus bays, traffic junctions, slip roads leading to my lane etc.

Often, on narrow roads, the cyclist behind me might yell out a warning, "truck approaching," usually after they were alerted by the sound of the truck and a quick look back to check. I am always struck by how much earlier my rear-view mirror had detected the truck, well before we could hear it.

It also helps me decide when to start filtering when I need to switch lanes. I use the mirror to look for a gap (an earlier traffic light may create a gap in traffic), and when one approaches, I swivel my head for an exact fix before making my move. This minimises traffic disruption and I find myself switching lanes in relative safety. 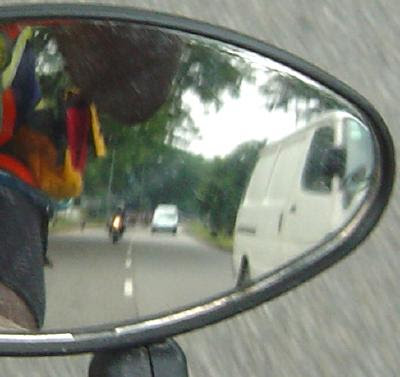 The area immediately before and after a bus stop is a hazardous zone to the left-lane bound cyclist. This hazard is amplified by heavy traffic and is potentially hazardous on narrow, busy roads which leave bus drivers with little leeway.

The critical zone is the corner of bus bays just before a bus swings in. This critical zone increases significantly with the bus' speed - although in actual fact, bus captains are supposed to slow down.

I try to eliminate interaction in this area well in advance with the help of my rear-view mirror. Depending on distance, speed and other traffic, I may slow down and get behind a bus well before we reach the bus-stop, or accelerate ahead, and take the middle of the left-most lane in front of the bus, before it turns into the bus bay.

By planning ahead, reducing the number of critical situations and expecting the environment to change at any time. I am able to react much faster to any given situation, enjoy a safer ride, and reduce or even eliminate disruption to traffic.

My observations of local cyclists at mass events or on the road suggests few seem to use a rear-view mirror, although these are easily available in bike shops. I do feel rear-view mirrors should be one of the minimum requirements a cyclists should bear, along with a helmet, rear and front lights, if we want to share the road.
Posted by Sivasothi at 2:17 pm 3 comments:

On my road rides, I have noticed that many bus drivers give cyclists considerable leeway.

I first began noticing this behaviour in 1997 when friends of mine and I used to ride from Serangoon Gardens to Changi. Along certain stretches of road like Hougang Ave 3, buses would leap-frog us as they overtook us but later had to pull in at bus stops and eventually overtake us again. In a highly populated area, the bus-stops occur in higher frequency and the amount of leap-frogging increases.

Yet, every time, bus drivers would pull out to the second lane when overtaking us - a safe and considerate gesture that we often acknowledged with cheery waves.

This was made possible by the fact that the three-lane roads were relatively empty on Sunday mornings. Bus drivers (or bus captains as they are called now, as they operate alone) are unable to be as generous on congested roads on weekdays. 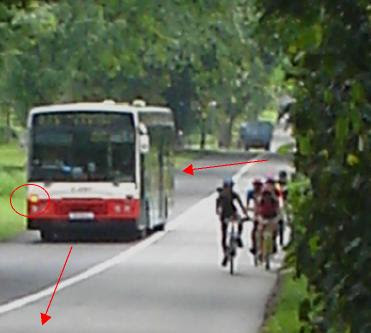 I took this photo at a narrow juncture of Lim Chu Kang Road last Saturday morning (16th April 2005). The road here is a single lane (just before Lim Chu Kang Lane 3) and on seeing the bunch of cyclists toiling up the slope, the bus captain pulled out to the opposite side of the road, in the absence of oncoming traffic, giving them considerable leeway.

That Saturday and the last, we rode more than 200km from town to the east and west of Singapore, spending several hours on the road. In relation to our cycling group, I observed more than 30 other acts of caution or consideration at give way signs, before and after bus bays, at traffic junctions and between lanes. With a rear-view mirror, I observed drivers slowing down behind us to a crawling speed when approaching us a bus-stop we were cycling past, while others maintained a distance in busy roads or switched lanes to overtake.

I gave up counting he number of favourable acts; and there were commendable driving practises demonstrated by other road users in relation to cyclists as well.

Cyclists tend to remember only the offensive (and I suspect, rare) incidents, when a rogue driver (they do exist) tries or manages to squeeze us off the road. And we amplify accounts told to us by friends.

My experience from the past years suggest that rogue bus drivers are a siginificant minority. Sure, we need to keep a lookout for these and ensure they are rehabilitated. But we have to attempt to acknowledge good driving practises just as enthusiastically.

And cyclists will have to scrutinise their cycling methods on the roads just as closely. Are we innocent of all guilt?
Posted by Sivasothi at 1:39 pm 2 comments:

A safe Dutch mini-round about

From Chu Wa - "I want to share this Quicktime clip from Holland - perhaps useful to trigger some re-thinking about road designs - the traffic flows smoothly around the mini-round-about, there is no traffic light, no stop sign.

Starting from the middle of the clip a cyclist cuts through a few junctions without stopping, all cars naturally behave as they approach the round about". 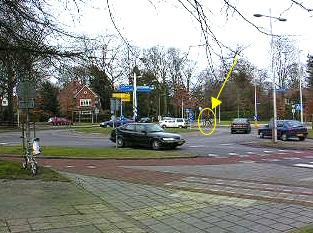 More info at this page: "How to build a better intersection." From "Roads gone Wild." By Tom Nichol, Wired News, Dec 2004.
Posted by Sivasothi at 2:00 pm No comments:

The mp3 files are available here - Green Transport Day and Cycling to Work.

Posted by Sivasothi at 10:43 am No comments: