Colin Leong announced on Love Cycling SG that he "started a Google map of bicycle rack/parking locations because I got frustrated trying to figure out if there are racks near places that I want ride to." Green pins on the map have photos of the parking facility; red pins are either unconfirmed or don't have photos. To contribute to this map by adding locations directly, please email varfie@gmail.com. URL to this map: https://goo.gl/5Kb3DC 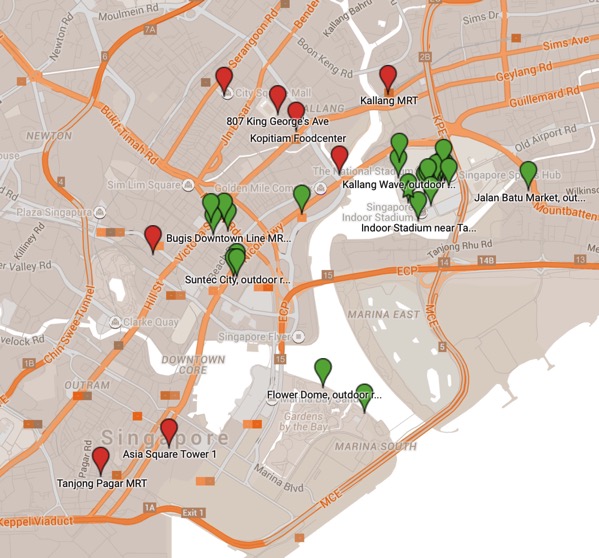 http://tinyurl.com/sg-bicycleparking also points here.
Posted by Sivasothi at 9:41 am No comments:

Email ThisBlogThis!Share to TwitterShare to FacebookShare to Pinterest
Labels: parking

These are the bicycle events that I know of so far this year. Do drop a comment if you know of  others which are suitable for recreational cyclists.

Posted by Sivasothi at 3:40 pm No comments:

Email ThisBlogThis!Share to TwitterShare to FacebookShare to Pinterest
Labels: event

No Speeding (cyclists) and No Motorised Vehicles banner campaign in PCNs

The Park Connector Network guides on the NParks webpage state that cyclists should "Keep within the speed limit of 15km/h".

Now there are banners along several NParks' PCNs with two messages, "No Speeding" with a bicycle icon and "No Motorised Vehicles". They were observed along the Changi Coastal, ECP, and Kallang-Bishan park connectors this week.

Widespread and numerous along each of the PCNc, their appearance is the equivalent of a campaign. Good surfaces and greater connectivity have put more and faster moving cyclists on the shared path of our PCNs which also see walkers, joggers, children and skaters.

Lack of a specific figure suggests the advise may be about relative speed, which would be slower than 15km/h on crowded portions of the PCN and faster on empty stretches.

Cyclists are the fastest and heaviest objects on the PCNs. They should thus take the greatest care and look out for others users, the way we hope motorists behave towards us, on the road.