Motorists passing the junction of Tampines Ave 9 and Tampines Street 45 at about 6.15pm today report at least one cyclist appears to have been knocked down by a cement mixer. 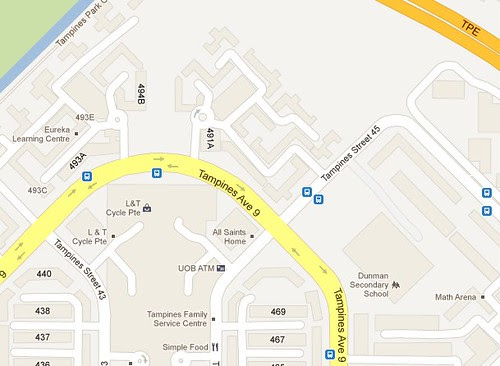 "TWO brothers were killed in a gruesome traffic accident in Tampines earlier on Monday.

The Singapore Civil Defence Force (SCDF) said it had received a call at around 5:43pm, and that the boys died after being hit by a truck at the junction of Tampines Ave 9 and Tampines St 45. The 13-year-old male cyclist and the 7-year-old male pillion were pronounced dead at scene by paramedics.

The younger boy was found in the uniform of Tampines North Primary School.

Police said that the 56-year-old Singaporean male driver of the truck was arrested at the scene.

Although they were found outside the school's gate, Dunman Secondary's principal Beatrice Chong confirmed neither boy was a student there.

Photographs of the accident have since been circulating online.

SINGAPORE: Two brothers died after they were hit by a cement truck near Dunman Secondary School, at Tampines Street 45.

The 56-year-old Singaporean driver has been arrested for causing death by rash act.

At around 6pm on Monday, the Singapore Civil Defence Force received a call for help.

But when paramedics arrived at the scene, both boys, aged seven and 13, were pronounced dead.

A MediaCorp hotline caller said that the incident happened only 50 metres from the school gates, and that he saw a smashed bicycle lying near the boys.

Speaking in Mandarin, he said it was an awful sight and very upsetting.

Some residents who live in the area say that the area where the incident happened sees a lot of traffic, and can be dangerous.

Another resident in the area, teenager Tan Khai Feng added that people sometimes also cross the road even though the traffic lights have not indicated that it is safe for them to do so.

Resident Lim Heng Chew said: "This is a hotspot for traffic accidents... (another boy) recently got knocked down by a taxi - the boy is my son's classmate."

He added that just a few months back, a Malay lady was also knocked down at the junction, and is worried because he has two school-going children."

"I am very saddened by the passing of two boys who were hit by a cement truck along Tampines Ave 9. They were brothers and the family is extremely distraught. My deepest condolences to the family. We’ll support them as best as we can. The Police will investigate this thoroughly, and schools will step up road safety education and work with the Police/LTA on further measures to enhance safety. Let us be sensitive and respectful, and not circulate photos about the accident. Let us give our thoughts and support to the family in this very difficult time."

Posted by Sivasothi at 8:08 pm