A month to go…

"The world’s biggest, completely unorganised, mass cycling rally will happen wherever you are, on March 20, between 6 and 7 pm. Why? Because you will be riding your bike.

Ride how you like, where you like, with whom you like, or ride alone. Just get on your bike and pedal the sucker. By doing so, you will be showing the world our staggering numbers, and unspoken yearning for safer, more edifying, cycling conditions." 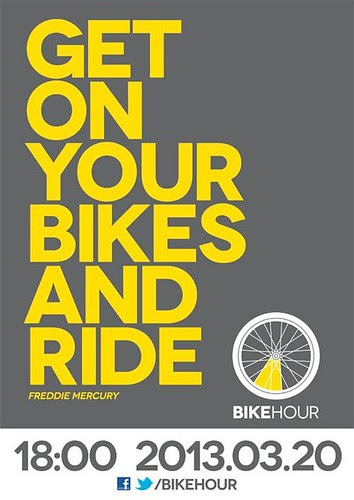 Founder Steven Fleming from Australia adds, "Bike Hour is being championed in dozens of countries now. There's no head office. No royalties. No power to be gained. We would like to think that no one can own the idea."

Bike Hour takes place at 6.00pm on the Equinox, in March and September.

Just give a shout out on the Facebook page to cyclists around the world at fb.com/bikehour.

Posted by Sivasothi at 8:25 am