While the debate about cycling to work ensues, the quiet and continued improvements to the park connector network promise to enhance the leisure cycling population of Singapore in the years ahead. After almost two decades, there is a safe way for the leisure cyclists to take to the streets and it is a cause for celebration!

If a path near your home has the PCN mark, rest assured you have a link to much wider and safe routes. Eventually this number will venture to the roads and join the call for better conditions on the road for cyclists and help to ponder the solutions. 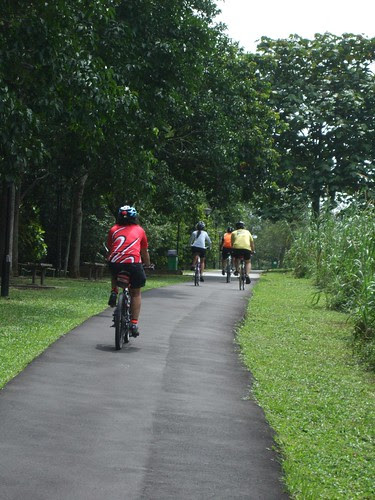 Ever since I heard that eight parks in the west were connected, I have been itching to give the Western Park Connector Network a twhirl. So two Sundays ago I headed out and the critical new addition? A bridge over the PIE! Now it is possible to cycle from Ghim Moh to Choa Chu Kang and Dairy Farm - all without fighting traffic! Yes, there is a safe reason to dust off that old bicycle now. 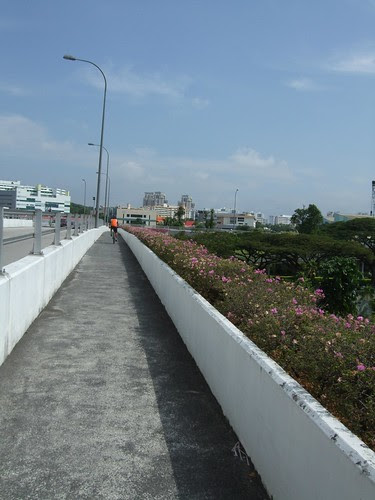 My fellow Zendog, Chi had scouted the route and along with Cat, Airani and Aaron, we took a slow ride (average speed 13km/h) through the Western PCN. Despite the lack of a sea view, athe western route is topographically more interesting than the coastal part of the eastern PCN, which connects Pasir Ris to Fort Road.

Our route that day included Dairy Farm, Bt Batok, Jurong, Choa Chu Kang, Pang Sua, Bt Panjang and Zhenghua. The links are smooth and much of the route is shaded. The government has certainly invested a lot of money in the PCN and it was quite a privilege to enjoy the ride! It's surely time for the average Joe to buy a bike and enjoy the plantings, routes and scenes - touring the neighbourhoods would definitely be an eye-opener for people from other parts of the island. 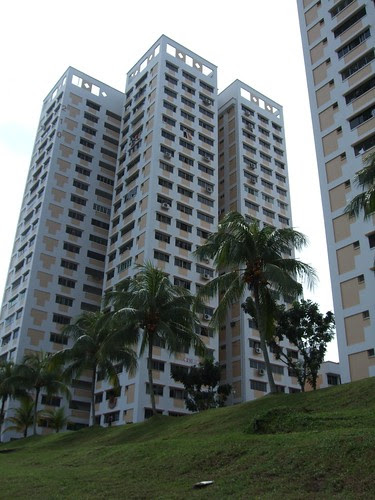 Zendogs are pretty familiar with the west, but even for us there are always new things and people to observe - a man was quarreling with a crow, whom he said had pecked his head. When we left he was still brandishing his slipper - and the bird was following him - quite a personal altercation! 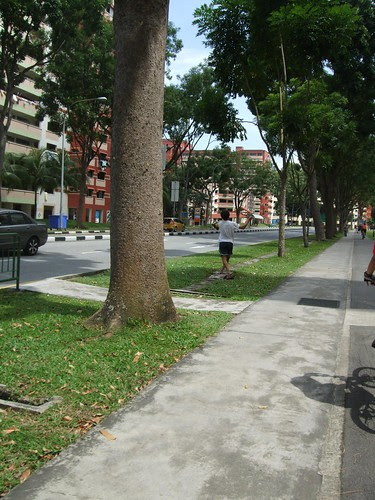 There are some pedestrian clusters through which you have to ride slowly or even dismount unless skillful enough to ride at a walking pace. Interestingly, people at these clusters were comfortable with our bikes, with no signs of nervousness that is sometimes observed elsewhere. We rode slowly, of course, extending to pedestrians the sort of courtesy we would like to receive from vehicles on the road. Since we were at a walking pace in some instances, we could even chat with some pedestrians! 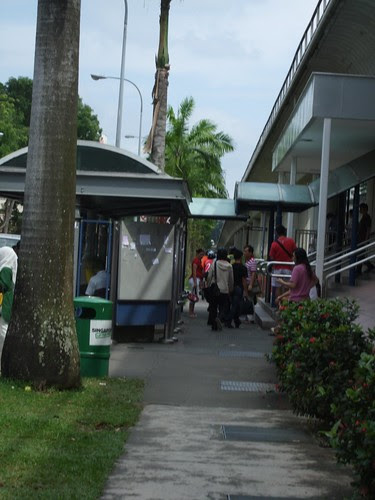 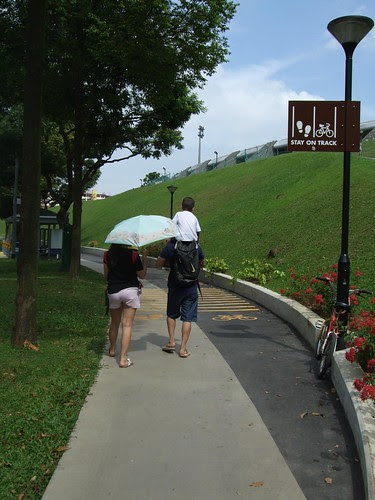 All along, the route was well signposted. The connections were really easy to make as well. 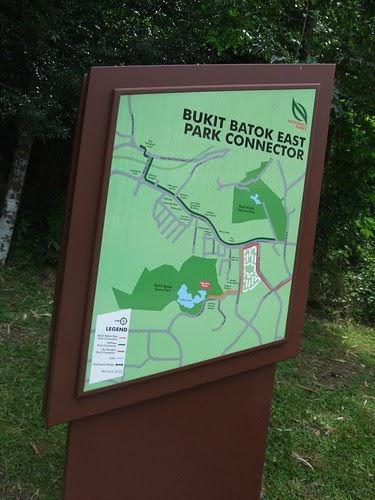 The Hillview Park Connector is a converted pavements for most of its length which run past condo entrances - these require cyclists to be alert about vehicles entering and leaving their premises. Since it was a quiet morning, I switched to the wide road, a better option here, I felt. Thankfully, most of the connectors are alongside rivers (canals) and MRT tracks - these were heavenly! 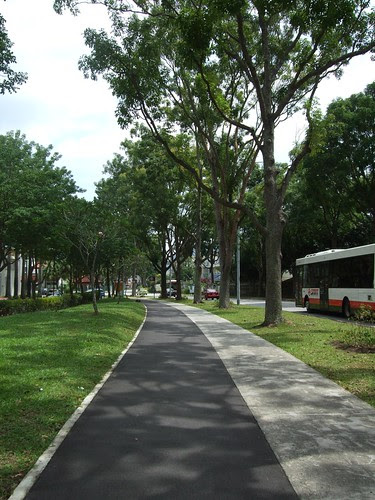 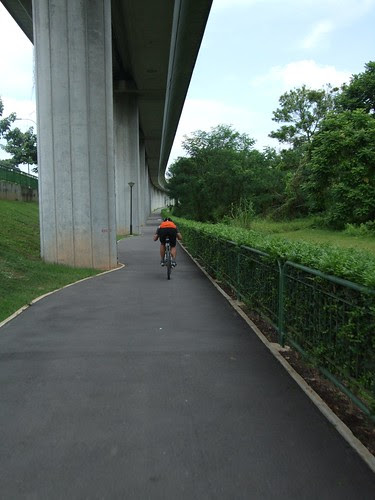 I only had an hour's sleep the night before and had a lingering cough but the rest had assured me a comfortable ride. True enough, I enjoyed the ride and covered 46km. The last bit through Zhenghua Park heralds the end with a rustic feel complemented by the design of the benches and playground and the type of plants - rainforest tree species which were planted, for a majestic future.

So what are you waiting for? Buy a bicycle and tour the west! In future the other PCNs will just as well be connected up. When the PCNs are then all linked, a leisure cycling paradise awaits you. It will be a great way to get to know Singapore. Meanwhile, my verdict? Five stars, out of five!

Will probably want to try this route sometime soon.

I'm more familiar with the Eastern connector route but my pet peeve has to be the unnecessarily high humps (some unmarked). Some of the route by bad design, lies in the shade which makes it more popular as a walkway than the pedestrian paths. It's a bit ridiculous to have to stick to the cycling paths that are crowded with people when the footpaths are almost empty.

the section of path between the PIE and bukit batok ave 6 has a road crossing it (the BB industrial park A road) with no markings, no warnings, and poor visibility to the right. BE CAREFUL here, approach with caution.

Hi Thomas, please send that comment in to NParks so they can address it.

You can do so here or email them at: NPARKS_MAILBOX@NPARKS.GOV.SG

Let me know, thanks!

response from Elaine Yap from NParks:

I refer to your feedback on Ulu Pandan Park Connector to the National Parks
Board today.

We will look into your concerns and install the necessary signs and
markings where they are needed.

Once again, thank you very much for your valuable feedback.

I went on GHIM MOH - Ulu Pandan Canal stretch last Sunday and found the mud trail just after the Sunset private residences area. Didn't know how it looks beyond this stretch as there's no signboard to indicate that there are other paths leading farther to either Jurong or Bukit Batok. I turned back. Would appreciate comments about the 'state' of this short strip.

You have to push your bike along a disused railway bridge over the canal. Once you reached the right hand side, there is another section of PCN to bring you towards Jurong and B Batok.

I am thinking of organizing a cycling trip with my friends at the western park connector, but was notable to find any bicycle rental shops.

Would you happen to know of any in the area?