The Tampines trial of legalizing cycling on footways will end soon. Whatever the outcome, bicycle dilemmas in the heartlands are not going away.

Will the law get enforced if the trail says no to pavement cycling? I doubt it. The Traffic Police have better things to do than enforce this rule against pavement cycling.

Personally I am sad about the media and public reaction to the trial. I had hoped that this would be an opportunity to move forward. But today I don't want to focus on the trial itself. Instead I want to look further ahead.

Even if much of the publicity has been negative, the trial has raised bicycle issues higher on the national consciousness. After the trial, bicycles may even be seen as even more of a problem than before. Complaints about conflict with pedestrians will continue. They may even get worse.

Maybe this can focus minds on the need to get serious about including bicycles in transport policy.

As we noted before, the Land Transport Master Plan 2008 takes a little more interest in bicycles as transport than we are accustomed to. But you could hardly call it a serious plan for a constructive role for bicycles in the transport system.

How could Singapore do better on bicycles? I am not talking about 'what' can we do, but about HOW we can do it. How can bicycles become an integral part of transport policy and planning here?

One key will be to establish clear lines of responsibility and leadership. The fastest way for bicycle policy to improve will be for a single agency to take primary responsibility for the issue. But which agency?

Best agency to take the lead on bicycle policy? The LTA!

I know that the LTA has not shown much enthusiasm for bicycles in the past. So it might seem odd to ask a reluctant LTA to lead the way. 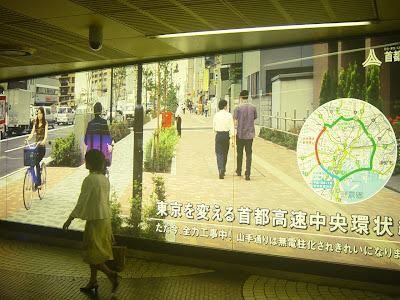 A poster in Tokyo highlighting bicycle infrastructure plans
in that extremely crowded city.
Singapore has some good bicycle policy efforts ... but they lack the coordination and expert guidance that they need

Various other agencies have taken significant initiatives for bicycle use in Singapore in recent years. Unfortunately many of these efforts suffer from a lack of coordination and direction. They would greatly benefit from leadership on this issue.

For example, NParks Park Connectors programme, which is wonderful in many ways, has design problems and many gaps.

Certain Town Councils, such as Pasir Ris and Tampines, have tried to create some off-road bicycle ways (with some built and others in planning). The ones built so far also have significant design problems.

Both the Park Connector programme and any efforts by Town Councils would benefit greatly if they could turn to the LTA (where the transport engineering expertise is) for clear national guidelines on design.

The Traffic Police took the lead (as I understand it) on the Tampines Footway Cycling Trial. The reported responses have been mostly negative (including even some bicycle enthusiasts, such as MrBrown). But the trial does represent a serious attempt to try something to resolve the squeeze that bicycle users face between the 'devil' of riding illegally on footways as many do, and the 'deep blue sea' of riding on the roads with the high-speed motorised traffic. It recognises the reality that most bicycle users ARE already on footways and that the law against this was not being enforced seriously.

But the need to have this trial highlights the policy vacuum on bicycles generally. The enforcement priorities and educational efforts of the Traffic Police could also benefit from a coherent national bicycle policy - led by LTA.

URA and HDB have created a rather permeable residential environment in many parts of Singapore which makes cycling for short trips quite easy in New Towns (despite the lack of dedicated bicycle facilities). But they could do even better if guided by a clear national policy, or by having someone at LTA to turn to for guidance on bicycle issues.

LTA's own Traffic Engineers also need the benefit of some leadership on bicycle policy! LTA's own road designs and lane-marking policies could easily change in various small ways that could make cycling safer. One example (among many) would be a policy of wider kerbside lanes wherever possible. Improving conditions for bicycle users is not rocket science. But LTA traffic engineers on the ground will not seek the necessary expertise unless they get a signal from above. And the top policy makers may not realise that there are actually many win-win opportunities to do better.

How could the LTA demonstrate leadership on bicycle policy?

How could MOT and LTA build on their recent small steps towards a more positive and comprehensive approach to bicycles as part of the transport system?

I think the key is to make bicycle policy someone's responsibility. Somebody specific. Not just the LTA in general but one little bit of it.

This need not be grand or require a big budget. A bicycle unit within the LTA could start modestly - maybe as a single Bicycle Officer. Amazing things can start to happen once even just one person in government has bicycle transport policy as their primary responsibility.

There are precedents around the world for this. One example is BikeWest the bicycle agency in Western Australia. It started small but grew into a significant sub-agency.

Once we get the institutions right for bicycles in the transport system, good bicycle policy is much more likely to follow. Meanwhile, bicycle dilemmas are not going away.
Posted by Paul Barter at 10:10 pm

Public transport is great for long distance trips, the macro picture.
Bicycle is great for short distance, door-to-door personal trips, the micro picture.
If this two can be combined in a seamless and safe way, the benefit will be wonderful and sustainable, just like the Dutch, Dane have been doing for decades and recently the British and French trying to follow.

Now is probably the best time for LTA to take leadership in bicycle policy, to pave the way to a better future for land transport for all in Singapore.

In addition to your sound augment, I would like to add that I am hearing more folding bike users who are switching to cycling from driving or at least supplement some trip by cycling. Their reason? Worsening traffic jams and raising ERP as well as gasoline price. The oil price is not going to come down and the energy cost of many other daily necessity is likely to keep going up. The idea of cycling as a practical and economically way of transport is certainly going to attract more people as time goes by. What we need LTA to do is to "enable" this movement towards bicycling in a systematic and coherent way, to make sure cycling can be safe and can be seamlessly integrated into the public transport systems.

Very true. The dilemma will remain and evolve. What is really needed is a head, an authority, a leader to set guidelines for handling such issues.

Just have an encounter this morning regarding a point I think need to be made very clear to all by some national level policy. It is the message that regardless legal or not, pedestrians have full rights to use footpath, and no obligations to give way to cyclists. I feel that a clear agreed upon right of way is important.

I was cycling, and there were pedestrians walking in both directions. I slowed down and moved on to a grass patch beside the path to give way. On hearing the noise from crashing the dried leaves, an old lady turned back, saw me on the grass patch, said sorry to me. Sigh, I hope I can "educate" her that she need not be sorry.

Similarly, all cyclists who cycle on footpaths should understand clearly that they should not expect or demand pedestrains to give way. When I am a pedestrian, I don't respond to, or I anti-respond to bicycle bell, by remaining on my path, which I think is safer than suddenly moving to one side.

If such a dedicated Bicycle Transport Unit were to be setup, I really hope it has a balance mix of road cyclists, drivers and pedestrians.