I refer to the report "Driver killed in five-vehicle pile-up" (March 12). My condolences go to the family of the deceased. It is a tragedy if an accident is due to the blatant recklessness of another person.

I have been living in the Loyang Avenue area for seven years and take regular evening walks there.

This stretch of road is infested with irresponsible truck and lorry drivers who speed.

Stand on the side of the road for 10 minutes and you will see what I mean. All it takes for an accident to happen is for a speeding truck to veer out of control and head for the pavement, which is about 2m away.

We need to enforce strict laws in the right areas and this is one of them. The lethal, moving "weapon" that weighs several tonnes can cause serious trouble on the road.

Also, these truck and lorry drivers are no angels - they are notorious for flashing their middle fingers and tailgating motorists to "drive home" their point. 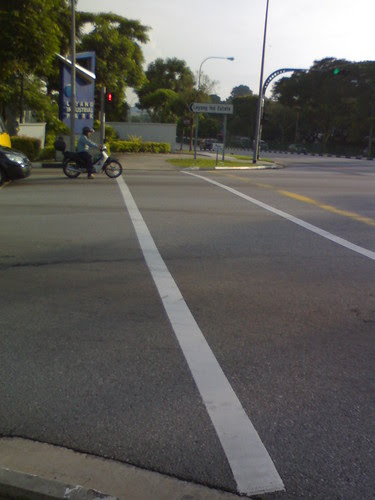 It was interesting to read this - I have found Loyang Avenue to be the scene of some aggressive heavy vehicle driving myself. I have ridden through on numerous occasions this past decade and have been particularly careful on that stretch on my way to Changi. I actually crashed once in the 90's when a falling headlight (it was a huge one attached to my basket) jammed my front wheel. I got tossed over the handlebars on a fast downhill stretch and I glad for my mental preparation. I managed to flip over and land, leaning iin with one foot on the pavement. First thing I did was to head further in across the drain to safety and sit down with my isotonic drink to cool down. Retrieving my bike, strewn on the side of that road could wait. My heavy steel bike, called Champion Du Monde, survived that crash easily but I had some recovery to do!

Cyclists no longer need ride that road - NParks has provided safe passage as part of the Eastern Coastal Park Connector Network (ECPCN), so cyclists ride to Changi safely while the heavy vehicles whizz by on the road. It is especially satisfying because you can see what you previously had to contend with from the safety of the PCN. With the industrial parks nearby, there are lots of cyclists heading to work in safety now. Quite the life-saver!

However the pedestrian crossing across the mouth of Loyang Lane forms a potentially hazardous intersection, due to the aggressive driving characteristic of Loyang Avenue. it is a downhill stretch for both driver and cyclist.

When Lekowala, Ladybug and I first tried out the PCN, as usual, we watched out for such turning vehicles. This despite our colourful clothes and flashing front and rear lights - a vehicle turning into Loyang Lane is coming sideways into us so could miss the lights. Since they turn fast, its unnerving for pedestrians and cyclists! So we usually wait until a vehicle turns up and stops; and its easier when there are lots of us.

On more than one occasion, we had to wave off an aggressive truck driver screeching into that intersection. Some drivers have tried to accelerate past us before we cross - despite the prominent green man at the pedestrian crossing.

So I worried about park cyclists out of Pasir Ris venturing to Changi on this new PCN. Some may expect the right of way when the green man turns on. Luckily there aren't many of those yet; it seems to be the "cycle to work" and more experienced road cyclists who are the main users right now. The connection out of Pasir Ris has an uphill stretch so that might deter the weak cyclists. I have seen the less discerning element on the flat stretch from Changi to East Coast Park. They have overshot intersections on that route!

After the first few rides on the coastal stretch of the ECPCN, I submitted feedback to NParks. It included the suggestion to paint a large "STOP" sign on the PCN track leading to the Loyang Lane intersection to alert cyclists, since they tend to the track in front of them. The other suggestion was for LTA to provide a black - yellow or orange - black sign at eye level of motorbike riders and lorry drivers with an "Alert: Cyclists/Pedestrian crossing".

NParks is looking into this and the other points raised in the feedback and highlighted from other blogs. The other thing to do would be an increased presence of traffic police and slowing that road down.

Posted by Sivasothi at 8:26 am

NParks have taken some remedial action. Good for them.

It seemed that all the 'senior senior' people had to cycle the full PCN (east) circuit following our feedback.

Read our lastest post and see our pics at - http://geylangboyz.blogspot.com/2008/04/bike-ride-4-still-it-was-fun.html

I have to agree with you. When I go jogging and attempt to cross the road at loyang avenue, the vehicles just zoom and its still very scary even with the green man on.

i have to agree with you. Even with the green man on, the vehicles just zoom and i was very scared whenever I crossed that road when i go jogging