In 2002, the Ministry of National Development's Parks and Waterbodies Concept Plan, prepared in preparation for the Master Plan 2003, stated:

"Today, we have 40 km of park connectors. The challenge is to build 3 times more green connectors or another 120 km to complete an island-wide network by the year 2015."

NO NEED to limit yourself to visiting just one park over the weekend - the newly-completed Eastern Coastal Park Connector Network will allow lovers of the outdoors to visit at least three.

The 42-km network, built at a cost of $22 million, links up the popular East Coast Park, Changi Beach Park and Pasir Ris Park, and other parks in the east, such as Bedok Reservoir Park.

Officially launched by the Minister for National Development Mah Bow Tan, the network is the first to be completed out of the planned total of seven throughout the island.

Eventually, major recreational spaces and housing estates will be connected.

The latest stretch of the eastern network to be completed - a scenic 7.9-km route that links Changi Beach Park to East Coast Park - brings the total length of completed park connectors to 100km. 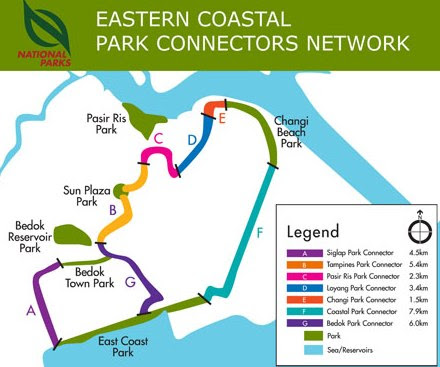 A western park network is in the works. And upcoming inter-park connectors include the Central Catchment Area, Punggol Park and Sungei Pangsua in the west.

Said Mr Mah: "The park connector network is an important part of our plans to transform Singapore into a 'City in a Garden' ... with green lungs set among buildings and built-up facilities.

With the completion of the Eastern Coastal Park Connector Network, Singaporeans can use it to get from their homes to the parks."

For instance, Tampines residents can jog, walk or cycle their way to the popular Pasir Ris Park through the connector.

Taking a spin through the new park connector was a team of 12 cyclists from the Ministry of National Development, who were symbolically flagged off for their 25-day cycling expedition in New Zealand to raise at least $100,000 for charity.

From the Channel NewsAsia report:

By 2015, NParks hopes to construct 200km of park connectors - to date, half of that has been built. More will be added beyond 2015. NParks' eventual goal is to create a connector network linking up the whole of Singapore.

NParks said it has taken special care to preserve the natural environment. Kalthom Abdul Latiff, Assistant Director, Park Connectors and Special Projects, NParks, said, "We try to preserve the rustic nature as much as possible. We do not want to change the ambience, (we want to) keep it rustic, so that people will get a different experience."


See other park connector posts in this blog.
Posted by Sivasothi at 7:55 am