Australia has just released a new national cycling strategy - AP-C85/05 : The Australian National Cycling Strategy 2005-2010. See also the Australian Bicycle Council, which is the body which administers the strategy.


Although its draft version was criticised by Australian bicycle advocacy organisations for its lack of firm commitment from governments, it should provide an interesting resource for bicycle transport advocates in Singapore where we are just taking baby steps on policy for bicycles as transport.

For example, check out this below on saving time by cycling! 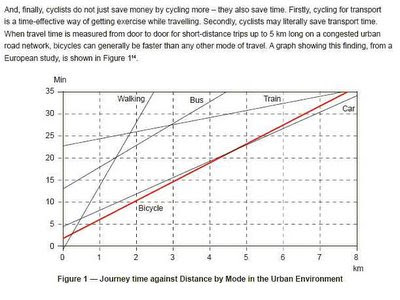 yes, the graph is very accurate i must say. the bus is the slowest tranportation of all, unless it takes the expressway. one can easily go faster on a bicycle than on a bus.