Cycling to Work Singapore in LTA's new book, "The Journey"

All text and images copyright of LTA (2005) and used with permission. 'The Journey' by Ilsa Sharp is published by SNP International Publishing and is available at all good bookstores. 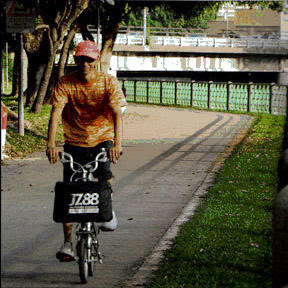 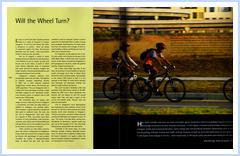 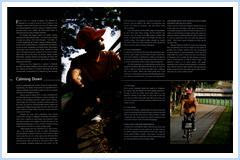 
Francis Chu is a cycling evangelist. His decision to abandon his car and to cycle to work is based on his thorough research into the pros and cons. He offers some convincing arguments on how cycling in Singapore makes practical sense, even within the hard-nosed frame of reference used by many transport planners.

For Francis, the biggest factor was health. Cycling improved his fitness dramatically - "Even after just a couple of weeks of cycling, I felt more energetic," he recalls. As a Senior Consultant for Product Design at Philips Design, he knew that modern lifestyles, including the combination of the car with automation and Information Technology, meant that most office workers hardly needed to move much. This lack of exercise, arising from the loss of simple daily tasks, lies at the heart of modern health trends.

Worldwide, transport planners increasingly are aware that there is an economic cost to the rising levels of ailments linked with inactivity.

Francis was first inspired by a sojourn in Holland, possibly the world's leading cycling nation. He also cites the striking turnaround in London following the British Government's commitment to a National Cycling Strategy aimed at quadrupling the number of bicycle trips by 2012.

Significantly, the British Government has signaled that it expects members of the health industry to set an example with their own transport choices.

Francis cycles at about 8:15 a.m. every morning from his Paya Lebar home to Toa Payoh, a journey of about 35 minutes. His workplace provides simple shower cubicles, which helps him to freshen up before starting work. On his return, he cycles to Toa Payoh MRT Station, pushes his single-speed folding bicycle onto the train with him, and then on arrival at Paya Lebar, cycles five minutes from the station to his home.

Viewing the issue with a designer's eyes, Francis reckons that cycling in Singapore would be a lot easier if there were a rethink on road design and if general 'traffic calming' principles were applied. As with the issue of the disabled boarding buses, it's just a matter of society moving a little slower and safer, for a better quality of life.

"But if you just closed one lane of traffic, immediately the perception of speed is different. Drivers tend to drive faster when they are on a wide, open road; otherwise they feel slow. If a road is narrower, drivers feel everything is moving much faster and tend to slow down. That's safer for everybody, including pedestrians and cyclists. It's the road design that is dangerous, not driver behavior. The planners need to balance the rights of pedestrians and cyclists with those of motorists, and slow down traffic where needed."

Francis also points out that MRT usage would probably go up if there were more cycling; "At the moment, the capture zone' for users of an MRT station is about 800 meters, or what you can walk in 10 minutes, but once you include cyclists, (hat capture radius enlarges by maybe live times." Here are Francis' answers to some commonly voiced concerns about cycling in Singapore:

I cycle about one-third of the time on the pavement, one- third on quiet roads and one-third on park connectors.

From recent debates in Parliament, it looks as though the authorities and Traffic Police are going to relax the laws on cycling on pavements, and in reality cyclists already do it.

The best protection is to avoid getting yourself into a dangerous situation, like when there are lorries or buses. A helmet is effective if you fall off your bike, but in collisions with cars or buses, there's not much proof that it will protect you. Most drivers here are quite friendly but still, it only takes one careless driver... so I cycle very protectively.

There's a lot the LTA [Land Transport Authority] can do if they have the motivation, they don't discourage or encourage cycling, but there are other things we can do within our limited space to make cycling safer and more pleasant, without a dedicated bicycle path. If cyclists are to cycle on pavements, they can make the pavement wider often there is grass alongside and that can be cut back a bit.

But the LTA has to make the connection that what they are planning now has an impact on the safety of people, and consider whether they are encouraging an active lifestyle or a passive lifestyle. I think what will really make the switch is when the LTA or the Ministry of Transport start to make the link between transport and its environmental as well as health impact. The Ministry's mission is to move people and goods efficiently; that's all they say their purpose is. Somehow, they and the LTA have fallen behind of her government bodies in their care for the health aspects. But I thinks it will come; it's a just a matter of time.

When people complain about (he weather in Singapore for cycling, they are basing it on their walking experience.

Actually, if you're on a bike, you'll notice that it's a very different country! if you walk, it's very easy to feel the heat, because there's not much wind. But if you cycle, you have a bit of breeze and this could be a difference of two degrees Celsius.

Compared to driving, I spend maybe 15 minutes more per day on commuting. And funnily enough, whether I take the MRT or cycle all the way from the office to home, it takes roughly the same time, about 35 minutes, mainly because of the train transfer at the City Hall interchange.


PEOPLE NEED CARS FOR THEIR FAMILIES

I realized that my family too didn't need the car much, and for the few occasions we do need one, we take a taxi or use public transport. Giving up the car has been a big cost saving, about $1,000 a month - that means I can use the money for a holiday instead! We have four folding bikes and I, my wife and two sons, all enjoy cycling.

Email ThisBlogThis!Share to TwitterShare to FacebookShare to Pinterest
Labels: cycletowork

Its great to see an article in a a LTA book (?)putting cycling in a positive light. I'm a cyclist myself though not commuting in that mode - because it requires long rides on risky main roads. So till the day the park connectors are up, I'll have to make do with conventional txport. Anyway, I found the suggestion to relax ride rules on pedestrian pavement to be a double-edged sword because cyclists will be once again in a limbo state - neither a pedestrian nor a road-user. Walkers and drivers alike would find riders annoying and feel that riders should be on the road or on the pavement (respectively). The solution, as you also suggested, are
1. realisation that cycling can lower the country's health care costs
2. Txport ministry designs roads with bicycles in mind as well
3. motorists respect cyclists right to be on the road.

I believe most of the heated debate around the issue of cyclist on pavement is trapped within the current situation in Singapore. The debate exposed how cyclist in Singapore has been ignored over the years- right now cyclist find themselves not welcome on the roads (by drivers) nor the pavements (by pedestrians). Cycle on the road at your own risk, or risk annoying pedestrians on the pavements.

To improve the current situation will take many effort and time. Many people are not comfortable with changes, there must be a strong reason for it, improve public health and quality of environment can be good reasons for most to support the change.

I do sense a positive signal in the recent debates. so I am still optimistic.

A little bird atop the canopy said...

Here is my take on why cycling on the road is far safer than on the pavement - busy road or not.

Selamat siang, Alan Preston here in New Zealand.
I'm just copying a comment I sent on this issue to a group who are horrified about the law being changed in Japan to allow cyclists to do what they've always chosen to do.
More follows on my web-sites linked below.

07.12.20 Alan to Blog . Sidewalk cycling in Japan http://www.atnak.com/blog_e/
----------------------------------------------------------------
" The fact that so many people choose to cycle in Japan has a lot to do with their not being forced onto the road with motorised traffic.
Young children, teenagers, women with kids, middle aged women, the elderly, the unfit and unsporty,- are all well represented in the utility cycling demographic in Japan.
I know,- I cycled on pavements (and on roads) there every day for 10 years (in and around Nagoya, Yokkaichi and Kyoto) .
Where I'm living now, in Christchurch, New Zealand's (mythically) 'most cycle-friendly' city, less than 2% (and falling) of traffic is cyclists. Cycling on sidewalks is illegal (and enforced) and the above-mentioned demographic groups are extremely poorly represented among cyclists.
They WON'T ride on the road with traffic,-even where there are cycle lanes.
The vast majority of cyclists in New Zealand are young men, assertive advocates of 'vehicular cyclism', riding mountain bikes and road racers as fast as they can, who for the main part seem to think that anyone on a bicycle should behave as they do.
The cycling advocacy movement is strongly influenced by their perspective, perceptions and assertions,-all backed up with statistics of course...-which plays into the hands of the auto-lobby because keeping middle-aged women, children and the elderly off the pavements keeps them from taking up cycling AT ALL,-which, by keeping the numbers down and the cycling demographic narrow, emasculates the cycle advocate lobby's technocratic approach to 'encouraging' cycling by compelling everyone to ride on the roads or where possible, in cycle lanes, because local government councillors, who have the last word, are hamstrung without having the political credibility that the numbers which a universally inclusive cycling demographic would give them,-to secure funding for the establishment of cycling infrastructure which has actual ( not just 'asserted') separation from motor vehicles.
Cycling advocates need to realise that we cyclists are not all the same and that we all have different styles of riding, preferences and needs.
If the Japanese Police were to force all cyclists onto the road, I have little doubt that you'd see a similar death of cycling to that which we have experienced here in New Zealand.
If I'm in a big hurry, I want to be have the right to ride on the road, but if I'm not, as one who is choosing the preferable (emission free) 'way forward', I also want the right to choose to ride on pavements where I see it is preferable and safe.

Yea im a teen and i enjoy cycling and its true i believe LTA should Draw some kind of dotted line on the road to allow cars to gauge how big the gap is to overtake a cyclist so its safer that way.

I think Rod's idea is simple and effective. Hope this can be done.
1) It supports the current driving lesson and raise the awareness to drivers who may missed or have forgotten about how to safely over take bicycles.
2) It is cheap. A very sparsely spaced, e.g. 20m gaps, dashed line will do. Can start from heavy bicycle traffic roads first.
3) It is technically and legally not a cycling lane. Thus, it doesn't go against LTA's [wrong] argument on space limitation.
4) It should encourage more to ride on roads, thus may eventually create the demand/reason/rationale/need/etc. for the authority to start converting some of these into proper cycling lanes.