The Singapore cyclist and the constant clash of wheel power 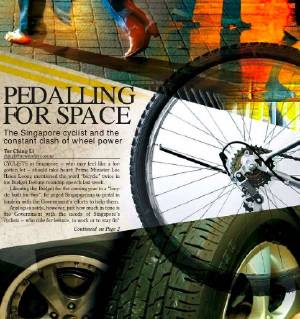 CYCLISTS in Singapore — who may feel like a forgotten lot — should take heart: Prime Minister Lee Hsien Loong mentioned the word "bicycle" twice in his Budget Debate roundup speech last week. Likening the Budget for the coming year to a "bicycle built for two", he urged Singaporeans to pedal in tandem with the Government's efforts to help them.

Analogies aside, however, just how much in tune is the Government with the needs of Singapore's cyclists — who ride for leisure, to work or to stay fit? Judging by the general outcry from cyclists — as well as their pedestrian "victims" — there is still a long way to go to make cycling safer here.

A recent commentary in Today titled "Vote for pedal power" hit a raw nerve among members of the cycling fraternity and sparked a flurry of responses, with appeals for ministries and agencies to address their plight. Ms Irene Ng, MP and patron of the Singapore Amateur Cycling Association, summed up the situation to the House as follows: "Because (safe cycling) is an issue that cuts across several different ministries and requires coordinated action, it seems to fall between the cracks with no real progress made."

Indeed, far from freewheeling, cyclists here face the hard-hitting reality of risking their lives on the road or paying fines of $1,000 and spending up to three months in jail for cycling on footpaths.

The number of cyclists involved in traffic accidents is on the rise, increasing from 341 in 1998 to 363 in 2002. The figure was 292 for January to September last year. . Offering pedallers a sliver of hope, the Ministry of Home Affairs responded to Ms Ng by offering the possibility of relaxing the pavement ban on cyclists. But evidently, much more must be done for the cycling community.

Calling for a multi-agency task force to make concerted efforts to protect cyclists and for a safe cycling campaign, Ms Ng said: "No matter how much enforcement or education is done, it is hard to make our roads safer for cyclists if our urban planners or transport policy-makers do not factor cyclists into their plans."

When it comes to public cycling facilities, it seems Singapore should go Dutch. Mr Lim Kong Hiong, who lived and worked in the Netherlands for 18 months, said: "In Holland, the importance of cycling can be seen in the presence of many facilities for cyclists. The attitude of other road users is also cordial compared to the attitude here."

So developed and entrenched is the Dutch cycling culture that the country has dedicated cycling lanes — complete with traffic lights for cyclists on major roads — bicycle stands throughout the city and even multi-storey bicycle parks with guards to ensure that expensive bicycles are not stolen, said Mr Lim.

In contrast, cyclists in Singapore have to endure rude stares even when cycling on proper cycling tracks in parks. "On several occasions, maids or pedestrians with baby prams or dogs have given me unfriendly stares and been unwilling to let me cycle through, even on a pathway made for cyclists and joggers," said Mr Eddie Goh. Unsurprisingly, cyclists here are casualties of the relentless national pursuit of "efficiency".

On the possibility of dedicated cycling lanes, the Land Transport Authority maintains that the need to optimise the limited land here rules it out. Only buses — as a "more efficient form of transporting people" — have been given dedicated lanes during peak hours. Said Mr Ong Kian Min, chairman of the Parliamentary Committee on Transport: "Dedicated cycling lanes are not feasible for a country such as Singapore. Rather, we should focus on promoting a safety consciousness among road users." Nevertheless, civil engineer-cum-cyclist Penelope Bennett said: "On-road facilities are the way to change motorists' 'I own the road' mindset and to really provide for bicycle commuters."

Meanwhile, don't even think of taking your bicycle on the MRT — the epitome of efficiency in people transport — as part of a "cycle-MRT-cycle" strategy. Unlike some rail operators in Thailand, the United States, Germany and France, both local train operators bar bicycles — unless they are folded — from the MRT. Why? Because they feel that bicycles could cause injuries or damage and would pose an obstruction to other passengers.

Nevertheless, respect for cycling as a form of transport is, as they say, a two-way street. Reckless pedallers have earned cyclists a bad reputation among motorists and pedestrians. Following the death of avid cyclist Sylvester Ang last December, a group of pedallers banded together to form the Safe Cycling Task Force. The group has met with the relevant government authorities to convey their concerns.

Mr Melvin Yuan, spokesman for the movement, said: "Our next step will be to create awareness and educate the public on the need to foster a partnership with other road users."

So you want to be a biker? Here are some safety terms and conditions:
• Ride your bikes on the left side of the road
• Wear a cycling helmet
• Ensure your bicycle is roadworthy and equipped with a light
• Signals when intending to stop, slow down and turn to the left or right
• Travelling to the right of another vehicle is against the law

Buy a biCycle . Check out the following websites to get a roadworthy bike:
• www.togoparts.com/bikeshops/list_shops.php3
• www.smbf.com.sg/bikeshop.htm

Park Connector Networks: The Urban Redevelopment Authority is planning a 170km green network to be completed by 2010, connecting park to park, coast to coast, parks to town centres … you get the picture.

Cyclist out of their own convenient and safety but choose to endanger pedestrian. Should slapped them with heavy fine, confiscate the bicycle and donate to school to teach the next generation on how and where to ride safely and not endangered other people. And now want to build more places for them to cycle and wasting taxpayer money. If tommorow motorist want to ride off the road because it is also not safe for them to ride on the road ... is the government going to allow them to ride on pedestrian crossing! Totally ridiculous!

I have yet to see a considerate cyclists on footpath. My conclusion : All cyclist on footpaths have ZERO regards for pedestrians! Haul them to court, slap them with a jail term, on top of a hefty fine. Confiscate their "vehicle" and send for smelting!
For repeat offenders, double the fine and imprisonment, every time!
I am sure to government will generate lots of revenue from this!!!!
Cyclist should NOT be tolerated on footpaths!
Kick all of the cyclists off the footpath permanently!

I ride on both pedestrian and road side as long as it is safe and basic common-sense prevails. It goes beyond just exercising legal plays or more regulations to make bike communting any friendlier in Singapore.