19.5km of new park connector to create a 30km loop around the nature reserve by 2018

A new 19.5km park connector will link the existing 5.5km bike trail and 5km Mandai Road park connector to create a car-free space for recreational cyclists to loop around the periphery of the Central Catchment Nature Reserve. 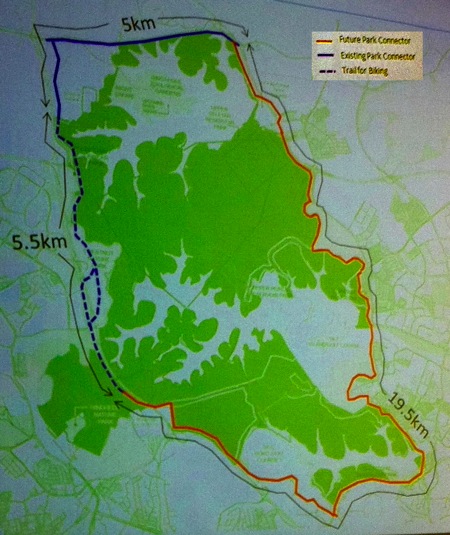 Nature buffs will have greater access to flora and fauna in Singapore with a 30km cycling loop to be completed by 2018.

The circuit will go around the Central Catchment Nature Reserve which covers the Upper Seletar, Upper and Lower Peirce, and MacRitchie reservoirs.

It will be formed by joining 10.5km of existing park connectors and biking trails that go around the northern and western borders of Central Catchment Nature Reserve to a new 19.5km park connector. This connector will encircle the reserve's southern and eastern borders.

The new cycling loop was announced on Saturday by Minister of State for National Development and Manpower Tan Chuan-Jin at the launch of the Festival of Biodiversity at the Singapore Botanic Gardens.

He also announced that the Government will be developing a new 80ha park, named the Chestnut Nature Park, just outside of the Central Catchment Nature Reserve.

The park, which will be ready by 2015, will have forest trails, shelters and educational signs.

One tower will be located in the Chestnut Nature Park and the other will be built by 2018 in MacRitchie Reservoir Park.

Mr Tan said the developments are part of the Government's objective of bringing people closer to nature and noted that almost half of Singapore land's surface is covered by greenery.

He said: 'Our parks are easily accessed by residents, with most homes within a short walking distance of a park. That is something that we'll work towards.'

He said the Government will continue to engage Singaporeans on new ideas about adding diversity to the urban environment.

He added: 'There will be areas where we can't always agree on, but there is also so much more space that you have found that we can work on together.'

Commenting on the new developments, National Parks Board director of conservation Wong Tuan Wah said: 'Some people say they have no time to enjoy the outdoors. Since you have no time, we will bring the outdoors to you. And if you have more time, we can help you to learn more with things like signages at the parks.'

The cost of the new developments is not confirmed.

Nature groups and the public welcomed the new plans.
Dr Shawn Lum, president of the Nature Society (Singapore), said: 'The Chestnut area is rich in biodiversity but is currently visited mostly by scientists or serious nature buffs. I think more people will be encouraged to visit the area in the future because of the park; it makes it more accessible.'

Teacher Germaine Foo, 46, said: 'I will consider getting my children to use the cycling loop in the future during their school holidays because part of it is near our home in Yio Chu Kang.'

On Saturday was the start of the two-day Festival of Biodiversity. The event, held at the Singapore Botanic Gardens, features exhibitions, workshops and guided tours for the public.

---
Photo taken at the launch of the festival.
Posted by Sivasothi at 8:59 pm