Bicycle lane is the way to go? 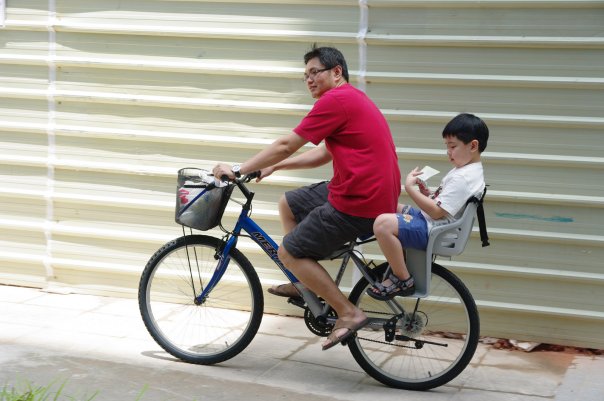 120 out of the 675 public feedback received by the Sustainable Singapore are related to bicycling.
This is an impressive figure because the invitation for feedback was wide ranged including:
Out of this 120 feedback an even more impression 75% suggested we should have bicycle lane to protect the cyclists from motorized transport.
It is very clear that there are many potential cyclists out there, but they are too intimidated by the danger on our roads. Without a safe environment cycling on the smoothly paved Singapore road remain only as a dream for most people.
No one is prepare to risk his life to become more green.
The heated debate over the trial on "Share pavement for pedestrain and cyclist" in Tampines is a clear signal that cyclists need their own space.
There will be less car if we built less road, there will be less people walking if there is no safe pavement. Similarly there are not many cyclists because there is hardly any safety facilities cater for this group of road users.
Judging from the public response, now may be the best time ever for the government to push for some bicycle lanes in Singapore.
Posted by Chu Wa at 9:54 am

Another possibility is to legislate, allowing a bicycle to take up a full lane like any other vehicle. That would improve safety on the roads for all users.

I believe some American cities have adopted such an ordinance.

Actually, I have seen many roadies here take the lane without repercussions from drivers. I do it myself sometimes when safety demands it (e.g. to avoid being pushed into a left turning filter). It is certainly true however that many cyclists, particularly construction workers, always cycle as close to the curb as possible, sometimes even weaving in and out of bus bays, which is extremely dangerous. But it seems to me that this could be better solved by educating such cyclists, since as far as I know no road cyclist in Singapore has been ticketed for taking the lane when safety demands it. The traffic police don't seem to strictly enforce the rule that cyclists should always cycle as far to the left as possible.

I believe that the usual law in American cities is that taking the lane is allowed if the lane is too narrow for a bike and a motor vehicle to travel side by side.

I suspect that unless it's done surreptitiously there would be significant protests from motorists if such legislation was pushed through here.

Thanks for your comments. You both have a good point.
I am concern that there are many different types of cyclist out there, each can be clustered based on their riding speed. Road bikes are the fastest and sometimes can be treated as a car.
But slower riders like mums bringing children to school or uncles riding leisurely in Geylang Road can not just "take the lane". They need a safety zone and should not be mixed with fast moving cars.
We need different strategy for different groups of cyclists.

I think there isn't any rules that disallow taking a lane, while my limited understanding is that motorbikes are supposed to travel in the lane. Thus, cyclists are only being advised to ride on the left, which I think is more for the benefit of not slowing down motorized vehicles. What's important is not the rules (especially when not set by cyclists) but one's experience and wisdom to do the safer thing.

For example, in regard to bus bay, I find it easier and quite safe to keep near the kerb (is that in and out?) instead of going straight on the left lane, which requires me to check for any buses behind and take the lane before each busstop I pass.

Yes, segregated bike lanes are ideal. But given that currently there aren't segregated bike lanes available, and many slower cyclists are already cycling on the road, I think there are situations where they need to cycle in a more visible way. In some situations, sticking religiously to a curb is more dangerous. The risk of getting 'left-hooked' for example is greatly reduced if you make a point to cycle more visibly near a left turn junction.

I must confess I don't see the point of cycling in and out of bus bays... I think it confuses bus drivers less if you keep cycling on in a straight line. It also seems to me that many drivers aren't on the lookout for cyclists coming out of bus bays.

Regarding cycling in/out of bus bays - I rather stay with the road.

I do agree that bikes emerging from bus lanes are unusual, so I feel this is the more dangerous option as motorists are less prepared for this.

Additionally, following the kerb edge through a bus bay means having to re-merge with the main road eventually. This requires stopping and often, waiting for a suitable gap in traffic, breaking up a ride's momentum which I rather avoid.

There are times when I have pulled in to a bus lane, though. When no bus is in the rear-distance and I have grown weary of particularly heavy and aggressive traffic!

Most of the time, in fact, if I see a bus directly behind me (I use a rear-view mirror) and signaling to pull in to a bus lane ahead of us, I filter right to the centre of the lane and accelerate away. This allows drivers to turn in to a bus bay earlier.

A rear-view mirror is a must for urban riding, I think. In my mainly off-peak riding experience, it has also helped highlight many acts of patience and consideration by bus captains to this cyclist.

I believe the main reason is I don't ride very fast on roads, as I don't ride a road bike, but just a 2nd hand Shimano so-called MTB without suspension bought in 96. However, I don't always go in and out.

Depending on my speed and traffic condition. If I am fast (may be above 18km/h as I don't have a speedometer), I will take the lane and go straight. However, I believe my usual speed is around 15km/h.

Also, when coming "out" from the bus bay, usually I could take the bus bay "lane" first and filter right to the left side of left lane and continue on within the double yellow lines.

Some reasons of moving into bus bay are: 1) I am too late to take the lane or forgotten to check for any bus or taxi/car turning in; 2) When there is no bus, it is a short relaxing time for me.