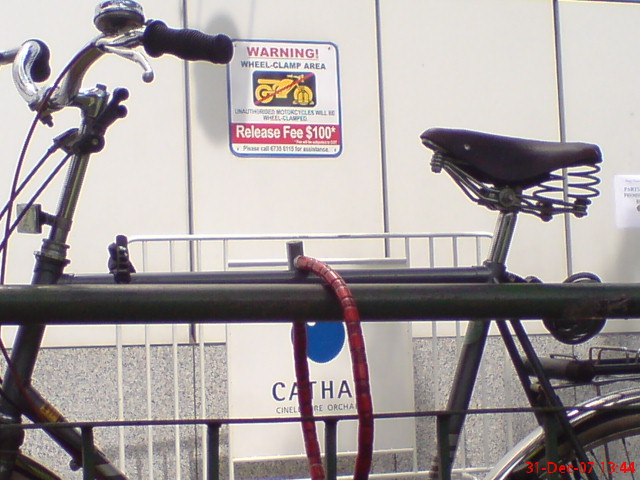 Check out the sign on the wall in the photo's background. My bicycle was mistaken for a motorcycle by the over-enthusiastic security staff of Orchard Cineleisure and 'frame-clamped' by their little red cable lock. I guess, they were afraid that I might drag race or drip some motor oil on the granite floor just outside the building ;-). So they locked my bike up.

I did appreciate the added security for my bike, though. It was only the inconvenience of calling the security department to unlock it. They, of course, came in a buddy pair (just in case the hurly-burly biker wanted a rumble!?) and pointed to the "No motorcycle parking sign". I was very amused. Shook their hands. My bike's horsepower has just been upgraded!

The facts of the story: They pointed to the motorbike wheelclamp sign and said "cannot park here." So I said, "cannot park what?" They pointed to the sign and said "bicycle." I asked what the picture was, and one of the security guards said that he will bring a very thick regulations book to prove to me that bicycles and motorcycles were in the same category of vehicles banned from parking at the side of the building. I thanked him and said I wouldn't know how to read it.

You see, the issue was that I cable-locked my bicycle on the "Cineleisure side" of the public/government fence. My tires were touching the granite floor that belongs to Cineleisure. When I said that the fence is a government fence, they said, "then lock it on the grass side." The grass side is state land allocated for the new *scape Youth Hub.

I was wondering what the real difference it would make to the building's facade, since my bike, if locked on the other side of the same part of the fence would still probably lower the status and value of the building with its presence (maybe I should get a Ferrari logo, might work better than my wornout Hercules decals! ;-) )

Posted by whitepomfret at 6:38 pm

Thanks for posting Theodore!

Also, see this forum for an account of a less pleasant encounter between an individual and NLB staff. He locked the NLB doors in retaliation!

Reminds me of people 'parking' at the NTUC bike station at Bt Batok MRT station. I'd share the pics but don't know how to add to this comment. BTW, tried but couldn't find the NTUC bs @ BB MRT station in this blog. Please let me have the link if you've got it.