"Parliament to debate safety of cyclists on Monday"

"Parliament to debate safety of cyclists on Monday," by Phua Mei Pin. The Straits Times, 08 Sep 2012.

Cyclists and their safety are among the top issues likely to be discussed when Parliament sits on Monday. MPs have filed nine questions on the topic, such as what more will be done to protect cyclists, how to integrate cycling into the traffic system, and whether cyclists will have to undergo road safety training.

Dr Janil Puthucheary (Pasir Ris-Punggol GRC), who wants to know how the Government plans to address the rise in cycling in Singapore, told The Straits Times: “Cycling as a mode of transport has not been adequately addressed."

MPs also continued to table questions on the controversial purchase of the Brompton bicycles by Nationals Parks Board, while some are asking about other issues like governance of Singapore’s interbank lending rate and the funding of Malay/Muslim organisations.

Six bills have also been tabled for debate on Monday. They include proposals to scrap pensions for the President, political holders and MPs, as well as tougher laws for errant employers of foreign workers. 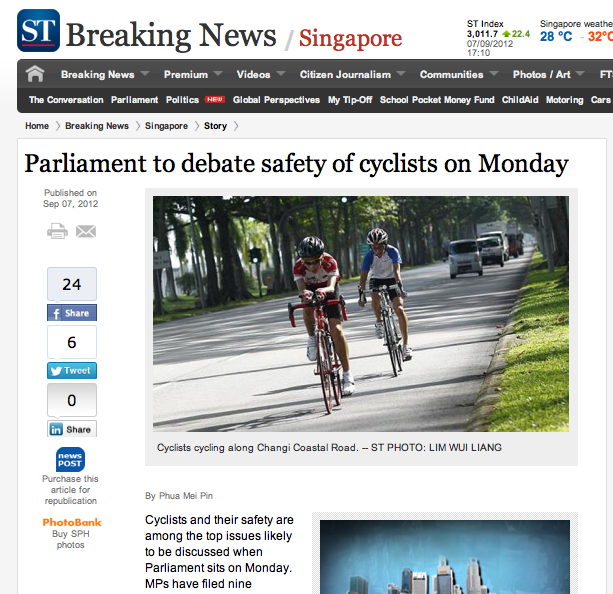 The parliament debate on coming Monday will be closely watched by people who care about the development of road safety facilities for cyclists. There are nine cycling related questions filed from different MPs, including Ms. Irene Ng (Tampines) and Dr Janil Puthucheary (Pasir Ris-Punggol).

I really hope the government will not use the same blanket statement (in land scarce Singapore..) to brush off the questions.

LCSg did some road measurement and discovered, there are more than a few roads have excessive road space enough to cater for safer cycling space, by shifting the double yellow line a little bit away from the curb. This will help to moderate the car speed and improve the safety of all road users in residential area.

In fact, if space limitation is the real reason, it should be more logical to encourage cycling and discourage driving, since the car is by far more space-hungry than the bicycle.

Please also show determination to curb dangerous riding, in conjunction with dangerous driving. Riding abreast on all major roads must be strong discourage. Its accident waiting to happen.